The image of pei pa koa:

Yes, this is the chemical or medicine that i would like to talk about in this post~ I m glad that i am gifted a healthy body that have strong immune system (i seldom get serious sickness throughout the years)...this enable me to keep as far away as i could from the pills and tablets (i m phobic to swallow those solid, although i m studying pharmacy~ =X ) Most of the time i will go for chinese medicine which is mostly in powder form to be dissolved in the water to 'drink' instead of 'swallow'.  This is why pei pa koa steps in and stick to my life (it is delicious!!)....

Pei pa koa is my all time favourite when i just started to feel the warning signals from my body about the cold and cough attack (sore throat, sneezing, cough and nasal congestion) and very glad that everytime it will successfully soothe my condition in a matter of 1-2 days. It is a traditional chinese medicine formulated by a doctor called Doctor Ip in Qing dynasty upon the request of a filiail son Yeung Kan to treat his mother's persistent cough. This is where the name of the product came: King-to (京都 which means Beijing）, Nin Jiom (念慈, which means memory to mother), Pei Pa Koa (枇杷膏, which means loquat syrup). The logo also came from this story - The filial piety trade mark
The logo:

This product is effective in clearing the phlegm, relieving cough and sore throat. Besides that, it also nourishes the lungs, relieves asthma, cools the body and improves skin complexion. You can take it when you are having irritataed throat (itchy) and when you are loosing your voice (after opening concert in k-box =p) as well as to alleviate thirst. Lets take a glance at the ingrediants in this superb product: 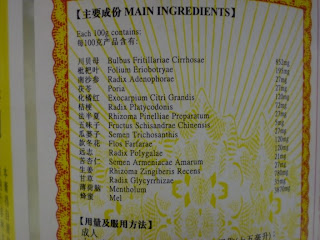 Most of the ingredients are extracted from the root, leaves, flowers and fruits. It is natural remedy!

The main active ingrediant is Bulbus Fritillariae Cirrhosae (川贝母).  It is used in traditional chinese cough remedies. It can suppress cough. It is usually combined with loquat extract, in this case the Folium Eriobotryae (枇杷叶).

This loquat leave extract ( Folium Eriobotryae (枇杷叶)) has soothing effect on the throat and can relieve cough as well. In addition, it acts as a demulcent and expectorant that can help in eliminating the phlegm and sputum, and at the same time soothing the digestive and respiratory system. However, large amount of it will cause mild but significant sedation.

Adenophora root or ginseng(南沙参) content improves blood circulation and 'bu qi' which can strengthen our respiratory and cardiovascular system.

Poria (茯苓) is a medicinal mushroom that induces diuresis and eliminats dampness and thus clearing the phlegm. Hence, it is useful in cough due to phlegm retention ( phlegm is due to water retention in the body). 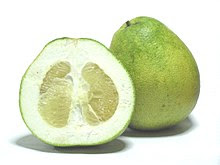 Pomelo peel (化橘红) is mostly for fragrance and flavouring purposes. 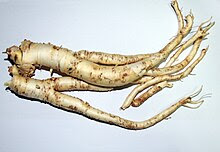 Platycodon / chinese bellflower root (桔梗)  acts as an anti-inflammatory in the treatment of cough and cold, especially useful for sore throat. 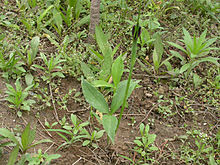 Pinelia tuber (法半夏)  is a herb that is proven to be effective in eliminating dampness phlegm. 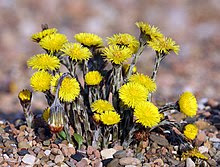 Polygara root (远志) functions as an expectorant that helps to remove phlegm. 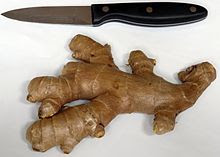 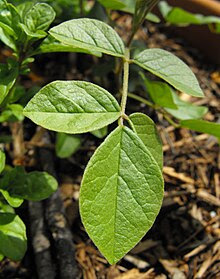 Apart from these herbs, menthol in a syrup, peppermint and honey base make this medicine especially tasty and yummy!

Everyone concerns about the safety and possible side effects of the medicines they take. Pei pa koa as a chinese herbal cough medicine is far safer than cough medicine containing drugs like codeine, pseudoephedrine, or virtually any pharmaceutical, and they are far more effective as well. False rumors, ignorant press, and pharmaceutical industry publicity has made some people nervous about the purity and safety of Chinese herbal medicine. The most important thing is to follow the direction of use!

The only thing one should take care of is the allergy to any of the herbs used. So, please be sure about this before you start taking this product. In addition, since it is in honey base, diabetics should avoid taking pei pa koa for their cough and cold. Last but not least, infant below 1 year old also cannot consume this product (and others with honey base) due to the risk of developing infant botulism.

Ehmm this is the chemical that i love the most when my immune system is low...taking medicine is never so enjoying except pei pa koa~ Thankz Nin Jiom company! Thankz Pei Pa Koa! ^.^v
Posted by yekjia at 22:53